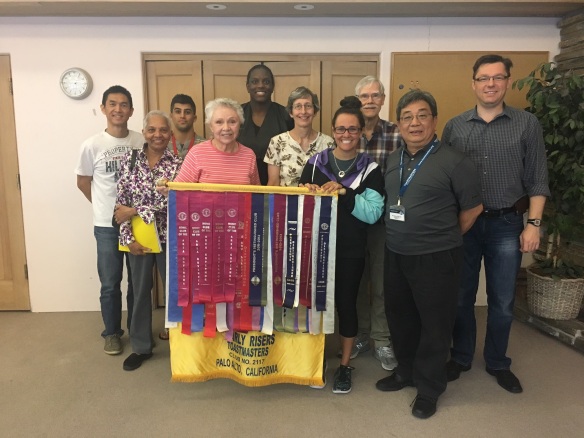 I have now been a member of Toastmasters for more than 18 months. My icebreaker speech was in June 2017. Since then I have delivered several speeches, have done several evaluations of speeches and fulfilled numerous roles in the weekly activities of my club, Early Risers 2117 in Palo Alto.

When I joined the Toastmasters, I did so for a number of reasons. I had retired from my full-time career and had time to pursue activities for which I had no time before then. I also wanted to do better in delivering speeches.  While I had spoken to my large team of 100’s and had addressed a much smaller audience, from board members to potential investors, vendors, and partners, I wanted to get rid of some of the laziness in my speech delivery and be crisp. I wanted to get rid of the filler words I liked using – so, you know, and several others.  I wanted to develop my skills in storytelling.

My criteria for choosing a club were quite simple. It had to be close to my house. I didn’t want to be commuting more than 10 minutes to attend a club meeting. The meeting had to be either early in the morning or late in the evening so that I could have the rest of the day to do other activities. The club had to have a diverse membership, where the members were not all techies.  And most importantly, where I would feel welcome as a 60+ years old Asian American woman.

Searching for a club in my hometown and neighboring cities in the bay area, I came across one that met in Mountain View, and one in Palo Alto. I first attended the Mountain View club. It was a good meeting, but all the attendees were much younger, probably under 30, and all tech oriented. Then I visited Early Risers.  The meeting time – 6:30 in the morning – sounded perfect for an early bird like me.  When I was working full-time, often I was the first in the office, and I suppose I wanted that aspect of my work life to exist at least one day a week in my retirement! The members of the club seem to be of varying ages  – from students in nearby colleges to retirees, men and women, and of various diverse backgrounds. It was also a very welcoming atmosphere. After the first visit, I was sold, and have been attending Early Risers since then. As someone who can’t help but be goal-oriented, I have achieved Competent Communicator and Competent Leader levels and on my way to the next.

Joining The Toasmasters is beneficial on many levels. I won’t list them all here. A very good short blog I came across called 3 Awesome Benefits of Being a Toastmaster is worth reading.

I would also encourage the readers to visit the Toastmasters International website and take a look around.

If you live or work in Palo Alto, Early Risers 2117 is the ideal club to hone your speaking and leadership skills. Try it.  Visit the club website, check out the Facebook page , and drop in on any Tuesday morning at 6:30 to experience it as a guest.